By OLALEKAN AYENI – An independent political group, ATA Vanguard has expressed support for the All Progressives Congress (APC), presidential candidate, Bola Ahmed Tinubu, the reelection of the Lagos State Governor, Babajide Sanwo-Olu and of Hon Temitope Adedeji Adewale as member of Lagos State House of Assembly, representing Ifako/Ijaiye Constituency 01 in 2023 general polls.
The group’s convener, Chief Lanre Arogundade (aka Isekolowo), on behalf of members expressed their support at a media briefing to officially unveiled the support group in Ifako-Ijaiye on Friday, November 11.
Arogundade said ATA Vanguard which is spread across all 7 wards of Ifako-Ijaiye Local Government has resolved to break a record in the next election by achieving 100,000 votes against 16,000 votes in 2019 in support of all the APC candidates in the state as well as the forthcoming general elections.
According to him, “Among those jostling to get the presidency, Tinubu stands head and shoulder above the rest. If we, as a nation, are ruled by the desire to tap our most competent, most able, best tested, and adroit consideration for the presidency, Asiwaju is the impeccable choice.
He added that Adewale, who is also a product of Tinubu, had proved beyond imagination in developmental projects and empowerment within his constituency.
“He is a dedicated and hardworking politician. A fellow who places people’s needs and desires way above self.” 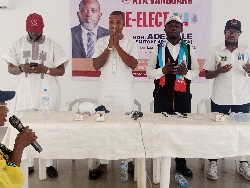 The group’s coordinator, Comrade Sunday Obanubi said it is high time, every Ifako-Ijaiye youth emulated the personality of Hon. Adewale and propagate his good deeds as it is the path in building the progressive and prosperous nation we all desired.
He said: “We are supporting Tinubu, Sanwo-Olu and Hon Adewale because they have been tested and trusted. We know they have the capacities to serve all Nigerians in equal measures.
He enjoined all youths in Ifako/Ijaiye Local Government to join hands in making the group’s aspiration a reality.
The Local Government party Chairman, Deacon Banjo Omole admonished all members of the group to embark on door-to-door campaign and ensure all residents collected their voters cards as the only instrument that will guarantee the success of APC in forthcoming elections.