By PRINCE ADEYEMI SULAIMON – OLUSESI (Secretary, 2021 Iganmode Cultural Festival Central Planning Committee)
It is no longer news that efforts are in top gear in the ancient city of Otta-Awori Kingdom to celebrate what will be  a unique, groundbreaking, and trailblazing Iganmode Cultural Festival 2021 otherwise known as “Odun Omo Iganmode Afeleja”
Odun Omo Iganmode is celebrated annually to project the rich culture, values and norms of the Awori people. It is a festival and cultural extravaganza  that stimulates our memories as a repertoire of our glorious past, a rekindle of our past heroic personage and a formidable fillip to a cultural reawakening. 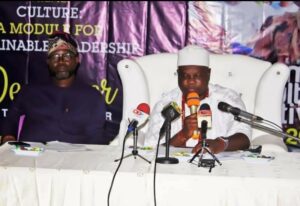 Since 1992 when the event started, It had never failed to  exhibit our distinctness, uniqueness, and greatness as a people of a noble origin. It reveals our strength and sterling fervour that strengthens our bond for communal understanding, love and unity.
Declaring the commencement for this year’s preparation, His Majesty, the Olota of Otta, Oba Professor Adeyemi Obalanlege Ph.D had said at a press conference a while ago, that; “every Odun Omo Iganmode Afeleja comes with great improvements on the previous ones”. The birth  of “Ileya Omo Iganmode” will be a novel experience at this year’s Cultural Festival.
In the spirit of “oonso laawa (We are one)”, Royal Fathers of  Iganmode lineage regardless of where they had migrated to ; Lagos, Oyo , Ogun or any other part of the country or in the diaspora , shall be accorded a rousing welcome to the land of Iganmode Kingdom. is this The Central Planning Committee in collaboration with Olota’s Palace are already tirelessly to give these prestigious  royalties a befitting and memorable day. They will start their day in Otta from their various Iga (compound) and make a royal procession to the Palace of Olota of Ota, where they will be welcome and hosted by HRM, Olota of Ota to a lavish reception.
The Odun Omo Iganmode Central Planning Chairman, Aare Ayodele Bankole while addressing the press, “we are still collating  the Awori towns and Obaships who are of Ota iganmode extractions with direct lineage to the ancient city of Ota. It is amazing to know that these eminent royalties have a very strong and close affinity to their root source’’. Awo towns and cities like  Iworo in Osun State, Isolo, Shasha, Meiran, Egbeda, Agege, Imeke, Ijanikin  and several more have direct umbilical ties to the ancient City of Ota – Awori.”
“Hopefully, we should be able to accommodate and lavishly host at least ten(10) of these royalties during the week of Odun Omo Iganmode commencing on 13th of December”, Aare Bankole added.” Ileya Omo Iganmode will be instituted eventually starting from this year, as a significant day of spiritual quest, an odyssey of some sorts to bring together all sons and daughters of Ota wherever they may be”
The leading towns and villages that has a very strong bond which identity could be traced to “Iganmode” among several others includes; Ijeru-Ogbomosho, Oyo State, Meran, Ijanikin , Egbeda, Isolo, Agege, Shasha, Ilogbo, Tigbo Ilu, Ikeja, Ikosi Otta, Ikotun, Egbe, Iworo, Imeke, Atan Otta, Ijoko Otta, Owode Otta, Iju Otta, Egushi Otta, Oke, Ore Otta, Ajegunle Otta, Oko Omi Otta, Obeere Otta, Mupin Otta, Oke Osa Otta, Ajibode Otta, Sango Otta, Ishaka Otta, Idedo Otta, ILoye Otta, and so many other ancient towns and villages whose identities are that of Iganmode.
Perhaps, all these aforementioned Awori towns and villages, just like Otta are not without their Traditional Heads coordinating the affairs of their domains for decades thereby promoting the rich culture of the Aworis and exhibiting all traits of “Iganmode” as warrior.
To kick-start, the hosting would be starting with Ten(10) high class Traditional Rulers traceable to the Otta Kingdom, and the Royals are;
1. Osolo of Isolo- HRM Oba Abdukabeer Agbabiaka
2 Onijanikin of Ijanikin- HRM Oba Alani Ashafa
3. Onijeru of Ijeru-Ogbomosho-  HRM Oba Olaniyi Popoola
4. Oniworo of Iworo- HRM Oba Oladele Kosoko
5. Osolu of Irewe- Oba Abideen Adekanbi Durosimi
6. Elegbeda of Egbeda- Oba Hamed Orelope
7. Onimeran of Meran Kingdom- HRM Samuel Oroja
8. Olu of Agege- Oba Kamila Oyedeji Isiba
9. Olota Ikosi- Oba Elias Adedapo Ijelu
10. Olojokoro of Ojokooro- HRM Oba Taiwo Ridwan Oluwalanbe
Meanwhile, the theme for this year edition; “Culture: A Module for Sustainable Leadership”, could not have been more apt especially as this  historical cum spiritual event has helped in projecting to the world the richness of the cultural values and norms of the Otta people and by extension, all Aworis.
On this note, “Ileya Omo Iganmode”  will be coming up on  Friday, 17th December,  2021, the eve of the Grande Finale.
Without a doubt, the event will leave everyone with a soothing, and incredible memory that will linger forever.