The Idiroko Unit Command of Federal Road Safety Corps (FRSC) yesterday flagged off ember months campaign at Atan Motor park in Ogun State.
Ember months campaign, being the yearly festival of the Corps, according to the Command’s Unit Commander, ACC Akinwunmi Akinsaba Olaluwoye, was not just a mere celebration but aimed at re-awaken the mindset of road users, especially the motorists about the necessity of obeying traffic rules while behind the wheel during the festive period and beyond.
Addressing at the public enlightenment with the theme: “Maintain speed, avoid night travels and enjoy quality road experience”, stressed the need for both private and public companies to avoid mounting unnecessary pressure on drivers who conveys goods, services or passengers from one location to another, saying the effect of such pressure usually caused reckless driving and fatigue leading to traffic crashes. 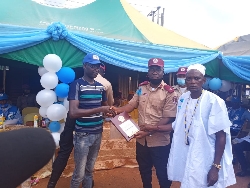 “Hustling and bustling in private and public companies are on the higher level as they are trying to meet up with their target as the year is winding down and commercial activities were increasing in major cities and towns. The resultant effect of much pressure sometimes lead to road traffic crashes occasioned by over speeding, driving under influence of drugs, overloading, reckless driving, night travelling, fatigue and lane Indiscipline which end result is traffic crashes.”
Olaluwoye said FRSC, being the leading government agency on traffic management cannot rest on its oars watching factors causing road crashes to continue existing, hence this frequent public enlightenment to re-awaken the mindset of motorists the need to strictly obey traffic rules to reduce mishaps during, before and after the ember months.
“FRSC would not rest on its oars, watching notable men and women, business tycoons, celebrities and others road users dying on the road through reckless driving and negligence of drivers.”
ACC Olaluwoye implored motorists and passengers to shun night travels, overloading, reckless driving and maintain minimum speed limit while behind the wheel. He also sought for proper maintenance of vehicles before embarking on a journey.
FRSC Ogun State Sector Commander, CC Ahmed Umar, said the upsurge in road traffic crashes in both commercial and communal activities could be traced to excessive speed and  wrongful overtaking.
Others he listed include fatigue, lane Indiscipline, aggressiveness, distractions such as using phone while driving, drunk driving and lack of proper planning before embarking on journeys.
Umar, represented by Ota Unit Commander, ACC Akeem Ganiyu, advised motorists to adhere to stipulated speed to avoid unnecessary crashes on the road during the ember months and beyond.
He enjoined drivers to avoid night travelling because of its numerous dangers like insecurity, poor visibility and lack of rescue operation associates with it, saying only driver that returned home safely after driving from one location to the other is the best driver.
“Everyone deserves good life, but this can only enjoyed when there is good health. Be a road safety personnel to enable you enjoy your hard earned money. Ensure your vehicle are properly checked and serviced before embarking on either short or long distance journeys.
“FRSC would continue to seek for support from all stakeholders on road safety. The choice of chosen Atan Motor Park as this year’s venue for this campaign has indicated that speed related crashes are on the high level along the route.
“Ogun FRSC has been ordered to intensify more on patrol operations during the Yuletide. To enjoy quality road experience for the remaining part of year 2021 and beyond, avoid drunk driving, maintain safe speed and avoid night travels,” CC Umar advised.